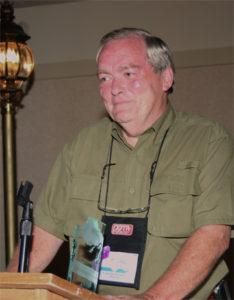 SEPTEMBER 1, 2006, JOHNSTOWN, PA — He’s The Terminator of volunteers. He’s 100-percent dedicated to the task at hand, determined to succeed, and willing to give all he has to get the job done. He’s Pat McHugh, president of MPI Outdoors and the recipient of the Professional Outdoor Media Association’s (POMA) first Emerald Cornerstone Award, presented for “Extraordinary Volunteer Effort”.

“This is not an award that POMA gives lightly or that POMA will present on a regular basis,” explained POMA Chairman, Betty Lou Fegely, as she presented the award to McHugh at POMA’s First Annual Business Conference at Springfield, Missouri. “The Emerald Cornerstone Award will honor those whose selfless service to our organization is truly extraordinary, those who harbor the passion for our organization and dedication that Pat McHugh has displayed.”

McHugh was a member of the founding board of directors of POMA, serving as the organization’s first Corporate Partner director until last week. When the elected board asked Pat to serve as the director who would represent the voice of POMA’s Corporate Partner member, he immediately agreed. When POMA was founded and needed financial assistance just to send mailings announcing the group’s launch, McHugh was there to do more than just pay the tab. He pulled the communications together, printed and mailed them. He initiated, designed and delivered POMA’s Corporate Partner newsletter, Focus. McHugh served tirelessly on the Business Conference Committee, giving hundreds of hours of his time to ensure the success of POMA’s inaugural event in Springfield and was the architect of the Field Day event at the conference. 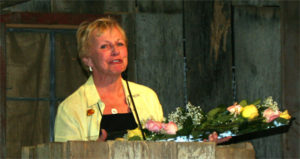 Fegely was honored during an emotional presentation by POMA Chairman Judd Cooney during POMA’s Third Annual Business Conference. Fegely is a founding board member of POMA and served as the organization’s first chairman and president.

“Without Betty Lou , POMA would not exist,” Cooney said with tears in his eyes. He added that the board of directors voted unanimously to change the name of the award to the Betty Lou Fegely Emerald Cornerstone Award.

“This is a tremendous honor,” Fegely said. “However, building this organization took the work of many and our industry should be proud and thankful for the thousands of hours of volunteer work that brought POMA into being and has ensured her strength. Today, the outdoor industry has a professional organization focused wholly on the traditional outdoor sports, the journalists who tell the story and the Corporate Partners who keep the industry going.”

The Betty Lou Fegely Emerald Cornerstone Award is not presented on a regular basis. It’s presented only to members who harbor a passion and dedication to the organization that result in selfless service to POMA that is truly extraordinary.

The Professional Outdoor Media Association’s Emerald Cornerstone Award is presented to individuals whose volunteer efforts in assisting the organization go beyond the norm… they are extraordinary. In 2009, POMA honored Vickie Gardner, VP of Stuff and Marketing with Alpen Optics.

“Vickie Gardner has selflessly served the organization from the day POMA was launched,” said Laurie Lee Dovey, POMA executive director. “Vickie served for several years as the Corporate Partner liaison on the POMA Board of Directors, but it’s Vickie’s behind-the-scenes efforts that are so amazing.”

“Vickie is always there to lend a helping hand — at conference, at trade shows or anywhere else she’s needed,” added Bill Miller, POMA chairman. “No one need ask Vickie for help… she offers assistance before there’s a chance to ask. Most amazing is Vickie’s attitude — always positive — always a smile. She lifts us (POMA, her friends and POMA staff and board members) continuously. She’s a beacon of energy, the power of positive thinking and caring.” 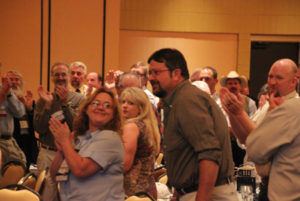 Russell Bailey isn’t a POMA member. He doesn’t even work in the outdoor industry. But, he’s one of POMA’s most dedicated volunteers and one of the most important people to ensuring the POMA Annual Business Conference and specifically the Corporate Partner (CP) events at conference, Shooting Day and POMA Camps, come off seamlessly.

Mike Capps, with Howard Communications, nominated Bailey for the Professional Outdoor Media Association’s Emerald Cornerstone Award, saying, “This guy is always there for us (POMA CPs), knows where all our stuff is, and always gets us set up with a smile. He’s amazing!”

The award is presented to individuals whose volunteer efforts in assisting the organization go beyond the norm… they are extraordinary. Bailey was honored as a recipient at POMA’s 2011 Annual Business Conference in Ogden, Utah.

Bailey was introduced to POMA when his wife Shelly, became POMA’s membership director in 2006. Bailey traveled with Shelly to POMA’s first conference, and hasn’t missed a conference since.

“Russ uses his vacation time each year to come to conference and work his tail off,” said Laurie Lee Dovey, POMA executive director. “We’d be lost without him. Not only does he make some of our core conference events the highlight of conference, he helps keep all staff on an even keel. Russ may not be in the media or even part of the outdoor industry, but he is a family member, one of us. He is so deserving of this award.” 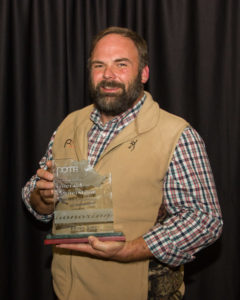 Kevin Tate, Vice President of Media Productions for Mossy Oak, was awarded the Betty Lou Fegely Emerald Cornerstone Award at POMA’s 10th Anniversary Business Conference, in Springfield, Missouri. Tate has served on the Board of Directors, and held the Chairman position twice. During a difficult time in POMA, involving board staffing issues, Kevin stepped up and returned to the helm of the organization. Not only did he assume the normal duties of Chairman, but he again helped plan POMA’s 10th Anniversary Business Conference along with POMA’s Membership Director, Shelly Moore, and Lisa Snuggs, Executive Director of the Southeastern Outdoor Press Association (SEOPA).

“Kevin’s leadership and support of POMA over the years has been unsurpassed and greatly appreciated, especially during our recent Executive Director transition. He stepped in and righted the ship and got us back on course. He is a consummate professional and a great person in general.” said Moore.