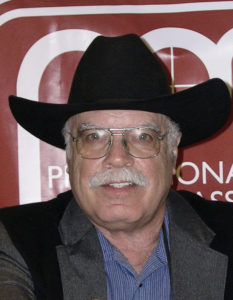 is a 40-year veteran outdoor writer with more than 2,000 articles and 3,000 photos published. He has dedicated his life to supporting and defending hunting, and describing ways for people to become better hunters in his books, lectures, magazine articles, and television show Jim Zumbo Outdoors on Outdoor Channel.

He travels 250 days a year with rifle, shotgun, and fishing rod, collecting content, photos and great stories. Zumbo also is deeply involved in working with wounded veterans, getting them outdoors and recharging their lives. Their experiences are highlighted on Outdoor Channel with the Jim Zumbo Outdoors: Wounded Warriors series. Much of his career was spent as a contributor and editor for Outdoor Life magazine.

“I know the selection of Jim Zumbo might surprise some because of a controversy he set off while working for Outdoor Life,” Gresham said.  “But I’m pleased, the award committee,  made up of the past recipients and POMA and NSSF representatives, looked at Jim’s entire body of work, as well as his part in awakening hunters to the need to support gun rights and all gun owners, when they voted for Jim in early autumn of 2013.

“After a lifetime of writing magazine articles and books, hosting Jim Zumbo Outdoors, and lecturing about hunting and hunting guns, Jim almost had his great body of work erased by a single mistake, which, in fact, may have done more to educate hunters than everything else he has done.

“After questioning the use of AR-style guns in the realm of hunting in an Outdoor Life blog entry, Jim heard the cries of gun owners. He immediately educated himself about modern sporting rifles and became a proponent of them. That speaks well of his intellectual honesty.”

Gresham summed up by acknowledging that Zumbo, in effect, brought millions to what is now America’s most popular firearm.  Gresham added he was glad to be able recognize Zumbo’s lifetime of work for gun owners and gun rights.

“Never in my wildest dreams would I have ever imagined that I’d be the recipient of the Grits Gresham Award,” Zumbo said. “I was shocked and totally overwhelmed when I learned the news. Part of my exhilaration comes not only from the fact that this is my beloved industry supporting me, but because Grits Gresham was my hero. I loved being around him, listening to his tales, and enjoying his modesty and down-home southern personality.  My profound thanks to everyone who made this possible. Now I need to pinch myself to see if I’m dreaming.”

POMA and the NSSF developed the Grits Gresham Shooting Sports Communicator Award in 2005, when NSSF honored Gresham with a lifetime achievement award.

As a full-time freelance magazine writer and book author I spend a lot of time alone - in the office, traveling and in remote locations. POMA through its Briefs, Business Conference and webinars offers me a very valuable means of staying in communications/networking with others in my field.... Read More