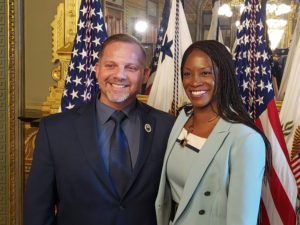 Skipwith was nominated for the post in July 2019 and recently confirmed by the U.S. Senate with a bipartisan vote of 52-39.

Skipwith has served as Deputy Assistant Secretary for Fish and Wildlife and Parks at the Department of the Interior since April 19, 2017. In that role, she helped ensure the protection and stewardship of lands and waters within the national park and wildlife refuge systems.

At the helm of the Fish and Wildlife Service, she will oversee a workforce of more than 8,500 personnel charged with working with others to conserve, protect and enhance fish, wildlife and plants and their habitats for the continuing benefit of the American people.

“Aurelia Skipwith’s confirmation is a win for everyone concerned with our nation’s natural resources and the ability of the American people to access and enjoy them for generations to come,” said USA CEO and Executive Director Scott Vance. “We have had the pleasure of working with her on a series of projects, and can wholeheartedly attest that her commitment to conservation, public access and cherished outdoor traditions such as hunting and fishing is second to none.”

Most recently, Skipwith assisted the USA with the completion of refuge-enhancement projects at John Heinz National Wildlife Refuge (NWR). Located six miles from downtown Philadelphia and within a two-hour drive of 35 million people, the refuge offers tremendous opportunities for connecting community residents with the outdoors.

“When funding and staff shortages left a number of maintenance projects at this urban refuge undone, Aurelia was instrumental in connecting the USA with U.S. Fish and Wildlife Service staff and getting the projects started,” Vance explained.

Additional recent USA projects with the Department of the Interior include fishing pier restorations at Jones Point Park, Ottawa NWR and Trinity River NWR, and mentored hunts at Blackwater NWR.

“We are honored to support the National Wildlife Refuge system and other facets of the U.S. Fish and Wildlife Service,” said Vance. “And we look forward to future project partnerships with the USFWS under Aurelia Skipwith’s leadership.”

“I am grateful to the Union Sportsmen’s Alliance and its union volunteers for helping improve public access to these natural treasures and making sure they remain places for families to enjoy the outdoors,” said Director Skipwith. “Their efforts truly make a difference for residents of surrounding communities, and for all who care about our refuges and other public lands. I'm excited about the Fish and Wildlife Service working with the USA and collaborating on many more projects that benefit American conservation and the American people.”

POMA is a money maker! A casual conversation at the POMA business conference turned into a friendship, and almost immediately, into a lucrative business deal for Gun Talk Media. In business, it's often about the contacts, and POMA provides quality contacts.