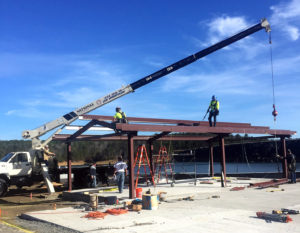 Apprentices pursuing careers in a variety of skilled trades are a potent source of volunteer labor in fisheries conservation, public access and outreach projects organized by the nonprofit Union Sportsmen’s Alliance (USA) Work Boots on the Ground program.

“Each Saturday, a crew of 12 to 20 apprentice plasterers and concrete finishers set molds and pour concrete to make habitat structures called ‘reef balls,’” said training coordinator Anthony Ditri. “As an instructor, I like the project because it not only helps instill a strong work ethic, it gives the apprentices an opportunity to give back to the community. A lot of them are outdoors enthusiasts as well, and take great interest in learning more about how the bay’s ecosystem works.”

“The Coastal Conservation Association of Maryland is thrilled with the launch of our partnership with the USA and the Plasterers and Cement Masons,” said CCA-MD Chair Kevin O’Donovan. “The cement reef balls built by the Local 592 apprentices will serve as important habitat for oysters and fish and will contribute to the restoration of the Chesapeake Bay as well as enhance sportfishing opportunities.”

The goal of the ongoing project is to construct 1,500 reef balls over the next three years for the CCA-MD’s Living Reef Action Campaign (LRAC). That calculates to a donation of roughly 6,250 hours of skilled volunteer labor valued at more than $330,000.

“Some of the structures are used to stabilize shorelines threatened by erosion, but many of them are used in building artificial reefs in the bay itself,” said CCA-MD Executive Director David Sikorski.

“Marine creatures such as oysters, anemones and barnacles inhabit the reefs,” he explained. “Through natural feeding processes, they filter algae and other harmful suspended solids from the water. Crustaceans and forage fish also flourish in the artificial reef ecosystem, providing a healthy food chain that supports striped bass and other popular gamefish.”

The list of conservation projects involving union apprentices is extensive, and includes the creation of a large public fishing pier and courtesy dock on Tennessee’s Lake Chickamauga; a kayak launch dock and other refuge-enhancement projects at John Heinz National Wildlife Refuge, located six miles from downtown Philadelphia; and a tournament weigh-in pavilion at Smith Lake, Alabama.

At Smith Lake, apprentices are helping create the pavilion at no cost to the local community through a partnership between the USA, B.A.S.S. and Alabama Power. “I’ve had 24 different apprentices working and training at the Smith Lake project over the past couple of months,” said International Union of Operating Engineers (Operating Engineers) Local 312 training coordinator Lee Smith.

Slated for a spring completion, the state-of-the art structure will boost fish survival rates, provide shade and shelter for weigh-in ceremonies and help generate millions of dollars in tournament-related revenue for the local economy. It will be open to recreational anglers as well as high school, college, amateur and professional tournaments.

Another current project, again in Alabama, involves union apprentices donating their skills to build “spider block” fish attractors for the state’s Department of Conservation and Natural Resources (ADCNR). The attractors—which help replace natural cover such as trees and brush that deteriorate over time in a manmade reservoir—quickly become home to aquatic plants, insects, baitfish and crustaceans, which in turn provide forage for crappies, bass and other gamefish.

United Brotherhood of Carpenters Local 318 apprentices, at their training center in Pelham, Alabama, built 100 spider blocks which have been placed in Pickwick and Little Bear reservoirs. Another group of 100 are being constructed at the Florence, Alabama, training center by Millwright and Machinery Erectors Local 1192 apprentices.

“In all, 30 apprentices volunteered about two days’ time (960 hours) to put together the first 100 spider blocks,” said Jay Schuelly, training coordinator at the Pelham facility. “I see it not only as a way for the union to do something for the anglers and community as a whole, but also as an opportunity to show our neighbors and friends what being a union member is all about.”

The apprentices’ willingness to lend a hand is exactly what the ADCNR needed, according to state fisheries biologist Kyle Bolton, who coordinates Alabama’s aquatic habitat recovery program. “We always seem to have a surplus of materials, but lack the manpower to build the spider blocks,” he said. “We and the angling public are very fortunate to have the union members and the Union Sportsmen’s Alliance help us with that.”

Rarely do government conservation agencies have the funds or human resources to cover all the projects they’d like to complete, and that’s where the USA volunteers step in.

“Many state and federal agencies, as well as conservation nonprofits, are looking for help with their habitat restoration efforts, and we’re proud to provide it,” said USA Conservation Manager Rob Stroede. “It’s a perfect fit for union apprentice programs everywhere, and we encourage all training coordinators and apprentices to join forces with us for conservation.”