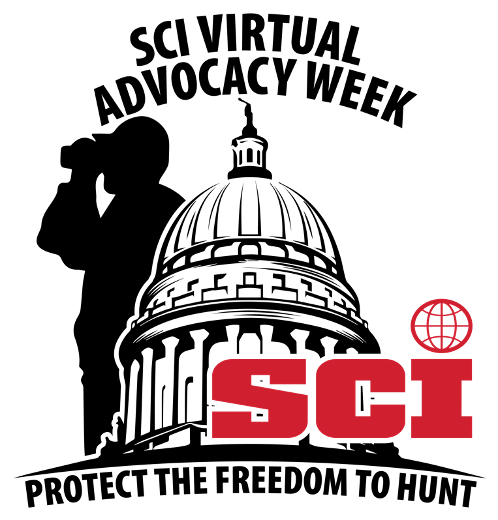 Washington, DC – (May 29, 2020) – Safari Club International (SCI) kicks off the organization’s first-ever Virtual Advocacy Week, June 2-4. The three-day event is a digital spin on the traditional Washington D.C. fly-in and annual Lobby Day. Through interactive video webinars featuring key decision-makers from the U.S. and Canada, SCI members will have a range of opportunities to advocate for hunting and conservation. Each session will include welcoming remarks from SCI President Steve Skold, President-Elect Scott Chapman, and CEO W. Laird Hamberlin.

The first session will focus on SCI’s federal advocacy efforts. Senators Cory Gardener (R – CO) and Steve Daines (R – MT) will discuss the Great American Outdoors Act, provide updates on their campaigns, and engage in a real-time Q&A with SCI members. The seminar will highlight SCI’s legislative priorities, which include modernizing the Endangered Species Act (ESA), avoiding detrimental import restrictions, and finalizing the delisting of wolves and grizzly bears. In addition, dozens of members of Congress from across the country have provided videos addressing SCI members and discussing issues of importance to hunters in their states.

On day two, the morning session centers around SCI’s advocacy efforts in Europe. SCI leaders will discuss a wide range of topics such as the United Kingdom’s proposed trophy import ban, sustainable use conservation practices in Europe, and SCI’s work with the International Union for Conservation of Nature (IUCN). Joining the program will be Torbjörn Larsson, the president of the European Federation for Hunting & Conservation (FACE), who will discuss FACE’s work to ensure that hunting remains beneficial for hunters, society, and nature and participate in a live Q&A.

SCI’s engagement in Canada will be highlighted during day two’s afternoon session, with Prime Minister Justin Trudeau’s egregious gun ban being the centerpiece of the discussion. The program will include live remarks from Member of Parliament Bob Zimmer, Chair of the outdoor caucus. MP Zimmer and SCI staff will discuss issues of importance to the Canadian hunting community and U.S. hunters interested in Canada, including the potential re-opening of the Canadian border to American hunters and anglers.

The events wrap up on Thursday morning with a session on SCI’s legal advocacy efforts. An official from the Department of the Interior is tentatively slated to join the program to update viewers on the Department’s proposed expansion of hunting and fishing access on 2.3 million acres of public land. Deputy Secretary MacGregor will field real-time questions from SCI members. Part of the program will include live engagement through SCI’s Hunter Advocacy Action Center, and SCI’s legal team will also describe ongoing and recent court cases and how these impact SCI members.

Virtual Advocacy Week is the latest example of SCI’s ability to adapt to the ongoing circumstances brought on by the coronavirus pandemic. It follows the successful Virtual World Tour and recent video interviews with Secretary of the Interior David Bernhardt and Secretary of Agriculture Sonny Perdue, which further cements the organization’s reputation as being “First for Hunters.”

Safari Club International – First For Hunters is the leader in protecting the freedom to hunt and in promoting wildlife conservation worldwide. SCI’s approximately 200 Chapters represent all 50 of the United States as well as 106 other countries. SCI’s proactive leadership in a host of cooperative wildlife conservation, outdoor education and humanitarian programs, with the SCI Foundation and other conservation groups, research institutions and government agencies, empowers sportsmen to be contributing community members and participants in sound wildlife management and conservation. Visit the home page www.SafariClub.org or call (520) 620-1220 for more information.