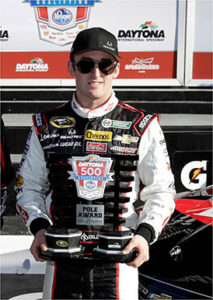 Realtree, one sponsor of the Richard Childress Racing No. 3, congratulates RCR rookie driver Austin Dillion for winning the pole for the Daytona 500 this Sunday.

“This is a great story for Richard Childress Racing, for Austin Dillon and his family, for Dale Earnhardt’s legacy and for NASCAR fans everywhere,” said Realtree Designer and President Bill Jordan. “When you look at how all the dots got connected on this one, it’s just unreal.”

The short version goes like this. Team owner Richard Childress decided the timing was right to re-introduce the No. 3 Chevrolet – famously driven by Dale Earnhardt to six of his seven Sprint Cup Championships. So, Childress put his grandson, Austin Dillon, who has driven an RCR Nationwide Chevy and Camping World Truck Series Silverado to recent championships, behind the wheel. In his Sprint Cup debut, Austin drove the No. 3 Chevrolet to the Daytona 500 Pole.

“I have never heard Richard happier,” Jordan continued. “We talked by phone that afternoon after pole qualifying, and you could really hear the excitement in his voice.”

Along with Chevrolet, Realtree is RCR’s longest-running sponsor, having been an associate sponsor on the No. 3 and No. 29 Chevy Sprint Cup cars since 1997. Realtree has even had the primary sponsor spot on several RCR Sprint Cup cars at Bristol and Talladega. In addition, Realtree is involved with NASCAR in many other ways:

– In 2008 “Realtree’s Driven to Hunt” television show began airing on ESPN. Since 2011 the racing/hunting show concept has been called “Realtree’s NASCAR Outdoors,” which airs on Outdoor Channel and features drivers, team owners, crew members and television announcers on outdoor adventures across the country. – Realtree also continues its partnership with Kevin Harvick, who will feature Realtree on his helmet throughout the 2014 season. Realtree has been with Harvick since 1999. Harvick is also featured regularly on “Realtree’s NASCAR Outdoors.”

“Realtree’s partnerships and friendships in and around NASCAR have really helped our business,” Jordan said. “We’ve been able to reach our customers in ways we never could have otherwise, and we’ve generated business with companies like Chevrolet, New Holland, Reese’s, Hunt Brothers Pizza, Shell Oil, Peak Motor Oil and Antifreeze, Grime Boss, Husky Liners, Caterpillar and Budweiser. It’s been a great run for us, and we have every intention of continuing to grow our business through our NASCAR connections. Richard and I go back a long way. We wish RCR the best in the coming year.”

About Realtree:
Realtree is the world’s leading camouflage designer, marketer, and licensor with over 1,500 licensees utilizing the Realtree camouflage brand. Thousands of outdoor and lifestyle products are available in Realtree camouflage patterns. In addition, Realtree is committed to supporting individuals and groups that work to ensure our outdoor heritage, the conservation of natural places, and the wildlife that resides there. Realtree promotes its products and relationships widely on television, as well as through http://www.realtree.com and many other outlets.

Like many POMA members, I wear a variety of hats. Part TV production, part public relations, part freelance writer, my job varies and I go where the day takes me. The associations I build, the contacts I make and the information I learn at POMA's Summer Business Conference helps me every step of the way.... Read More