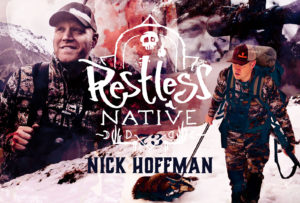 I think your luck is created. Your success is directly related to the amount of work you put in. — Nick Hoffman

Brad Luttrell, the host of Restless Native and cofounder, CEO of GoWild hosted this show during POMA conference in Wichita last month.

NIck Hoffman is a fiddle player, pilot, television host, hunter, producer, conservationist, POMA board member and so on and so on.

Nick Hoffman is a lot of things. He and Brad have become friends over this last year, from meeting up at tradeshows and POMA this summer. It's easy to love what he’s all about.

He’s got a really interesting story and a good heart. In our short, he seems to be authentically Nick all the time. Camera on, camera off, it just seems like he’s always himself. In fact, when he and Brad presented together on POMA’s panel, he pulled up a picture of himself where he’d gotten scoped. If you don’t know what that means, he had shot a rifle and the gun kicked the scope into his eyebrow, and he had blood running down his nose.

This photo was a great display of his humble personality. Many TV show hosts would hide from that moment. They’d delete the footage and it’d never be spoken of again. But Nick led into his presentation with that with no shame.

Join Nick on GoWild, and join in the conversations around music, the outdoors and more.

Did you miss our interview with other POMA members? See who we've chatted with here.

Two months after going full time as a writer I joined POMA and attended their convention in Ogden. POMA has helped me make a lot of good contacts, writing and Pro-staff deals. I don’t see how you can go wrong by joining. If you want to write part-time, it will make you a better writer. If you want to go full-time, you’ll make more contacts.... Read More