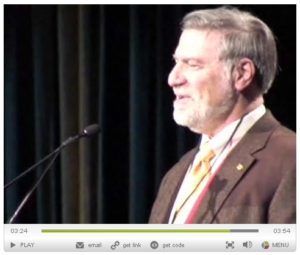 In honor of legendary outdoor communicator Grits Gresham, POMA and the NSSF developed the award in 2005 to recognize communicators within the firearms/shooting sports/Second Amendment arena who grasp the ideals, foster the commitment, and display the talent Gresham showed during his storied career. Tom Gresham presented the award.

“I had the privilege of knowing Grits for a long time, and hunting with him,” Petzal said. “There was no nicer guy or finer sportsman. Being given an award bearing his name is probably more than I deserve, but I’ll accept it anyway.”

Petzal started his communications career in 1964 as a magazine editor. In 1972, he became Managing Editor of Field & Stream, and since has held six different titles on the masthead. He is a graduate of Colgate University, was a drill sergeant in the U.S. Army, and has hunted in the United States, Canada, Alaska, Africa, Europe, New Zealand and New Jersey.

In 2008, Petzal retired, but still handles the rifles department for Field & Stream and is, along with Phil Bourjaily, a co-contributor to the Field & Stream blog, the Gun Nut. Petzal authored six books, and looks forward to, “not doing any more, ever.” For recreation, Petzal says he shoots trap and fly fishes — badly.

Nominations for the Grits Gresham Shooting Sports Communicator Award come from all corners of the shooting sports industry. Nominees are not required to be affiliated with a communications or industry organization.

Shooting sports industry professionals are encouraged to make nominations for the award through the POMA website: www.professionaloutdoormedia.org.

POMA is amazing. The responsiveness to member needs is unheralded among professional organizations. POMA listens to our clients’ needs and reacts to them. POMA’s commitment to the industry shows at every conference. Our clients can’t afford to not be at the conference each year.