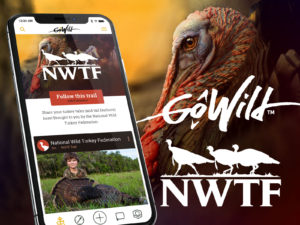 NASHVILLE, Tennessee — One of the more storied organizations in conservation and hunting is partnering with the outdoors industry’s fasting growing tech startup. As the National Wild Turkey Federation expands upon its efforts to recruit, retain and reactivate hunters, it’s adding high tech firepower to its communication plan — a partnership with GoWild.

The NWTF’s partnership with the outdoors social media and activity tracking platform allows the organization to modernize its messaging and better appeal to a budding generation of young and first-generation or adult-onset hunters.

“GoWild quickly turned into a place where people realized they could get real time advice for their outdoor pursuits without all of the hassle and politics that can come with other social media,” said Brad Luttrell, the Co-Founder and CEO of GoWild. “Our team couldn’t be more excited to put the power of this community to work for an organization like the NWTF. Few groups have done more for conservation.”

The First Project: A Sweepstakes Promoting Conservation & Mentorship
For the first initiative in the partnership, GoWild is hosting a sweepstakes for the NWTF. Any NWTF member — new or old — can sign up for a chance to win the NWTF Turkey Hunting Sweepstakes. Details on how to enter will be announced on February 10th, 2019 via the GoWild app (available on iTunes or Google Play).

“This isn’t just about new memberships, we want to drive awareness of the value of volunteering to help in the name of conservation,” said Becky Humphries, CEO of the NWTF. “Just as we’ve fought to bring the numbers of turkeys back to a healthy population, we must now focus on raising the number of hunters. Our partnership with GoWild will help us reach a new generation of hunters, and that’s what it’s all about.”

Also, a second sweepstakes will launch soon in partnership with nonprofit Raise ‘Em Outdoors and outdoors land rental tech company Outdoors Access. Anyone who isn’t a member can join at nwtf.org.

In-App Functionality for NWTF
Together, GoWild and the NWTF aim to activate even more people to participate in mentorship, conservation efforts and share lessons beyond hunting. Within GoWild, mentors and mentees can live track hikes, scouts, hunts, archery practice and more. GoWild is donating the sponsorship of its Turkey Trail (essentially a forum of content all about turkey hunting) to the NWTF.

At the Convention
Team GoWild will be at the NWTF Convention and Sport Show in Nashville on Feb. 14 and 15. On Thursday, attendees can find team GoWild at the Hunting Heritage Programs booth, where they can learn about the app and partnership, as well as get info about how to enter in the sweepstakes.

“GoWild has an eclectic group of outdoors enthusiasts,” said Luttrell. “We’ll never be able to do what the NWTF has done for the turkey, but it’s my hope that with this new partnership, we can create some turkey hunters who might have just remained hikers or anglers without us.”

About the National Wild Turkey Federation
When the National Wild Turkey Federation was founded in 1973, there were about 1.3 million wild turkeys in North America. After decades of work, that number hit a historic high of almost 7 million turkeys. To succeed, the NWTF stood behind science-based conservation and hunters' rights. Today, the NWTF is focused on the future of hunting and conservation through its Save the Habitat. Save the Hunt. initiative – a charge that mobilizes science, fundraising and devoted volunteers to conserve or enhance more than 4 million acres of essential wildlife habitat, recruit at least 1.5 million hunters and open access to 500,000 acres for hunting. For more information, visit NWTF.org.

About GoWild
GoWild is the most active, fastest growing social media and activity tracking platform for outdoors enthusiasts. The GoWild app is free. GoWild is headquartered in Louisville, Kentucky. Download the app for Android, iPhone or Garmin at timetogowild.com.

I am new to the industry, and I know there is a lot of water left to tread before I find my own sweet little island. However, because of POMA and the commitment and conviction of its founding members, I now have more confidence and better tools than I could have imagined receiving from any other source.... Read More