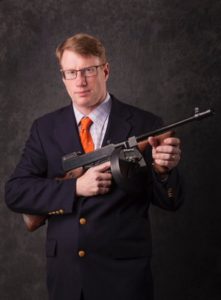 “I couldn’t be happier with the committee’s selection of Mark for this award,” said Gresham.  “He’s a skilled communicator, but he also is a true gun geek — someone who enjoys the history, the details, and the workings of both old and new firearms.  I’ve been privileged to spend time in the field with Mark, hunting and shooting, and he is one of the most knowledgeable authorities on firearms I know. His integrity, loyalty and determination make him who he is.”

POMA and the NSSF developed the Grits Gresham Shooting Sports Communicator Award in 2005, when NSSF honored Gresham with a lifetime achievement award.

I’ve learned over the years that the quickest way to get from where you are to where you want to be is to find someone who is already where you want to be and do whatever he or she tells you to do. POMA is the best place to find a mentor to help you become an outdoor communicator, a PR professional, a videographer, a photographer or any other area for communicating the out-of-doors.... Read More