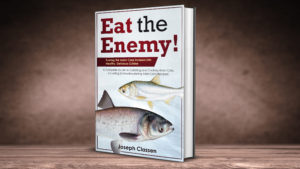 The following is the latest review of POMA member Joseph Classen's new book on the Asian carp epidemic: Eat the Enemy!

Picture yourself out for a celebration dinner at an upscale seafood restaurant. So many choices on the menu: Orange Roughy, Chilean Seabass, fresh lobster – Asian Carp? Hang on, wait just a second, the last item must be a mistake! Who would put a “trash fish” like the Asian Carp on the menu? Joseph Classen, that’s who.

Classen’s new book, “Eat the Enemy!” explains why the invasive Asian carp should be on every menu and family dining table around the country. The outdoorsman, author and photographer is working to spread the word about a clean, healthy, undervalued and an entirely wasted resource that also happens to be environmentally devastating our rivers.

Make no mistake, the Asian carp invasion is a disturbing tale that has been told by many different organizations, conservation agencies and media outlets. However, “Eat the Enemy!” is a much-needed refreshing look at one solution to the dilemma and crisis facing our waterways.

Asian carp were imported to aid in cleaning of aquaculture ponds in relation to commercial fish production in the 1970s and 1980s. Through natural events, such as flooding, the carp escaped into outside water systems. Many river ecosystems from “southern Florida to the Canadian border” have now been taken over by the invasive fish.

The terminology “taken over” is really a nice way to put it, but here is another. The rivers we know here in the Midwest are no longer the same rivers we grew up with and enjoy. The life is being choked out of our rivers, native fish and wildlife and their habitat is being decimated.

Classen, a native of St. Charles, Mo., spent his childhood on the muddy banks of the Missouri River. His love for the outdoors and outdoor lifestyle grew into a life-long passion. “Eat the Enemy!” takes the reader on the journey of Classen’s outdoor life from the Missouri River to Alaska, from child fisherman to fully skilled “river rat,” and many more of his outdoor adventures.

Classen’s outdoor resume has brought him full circle back to Missouri and his knowledge, devotion and appreciation of the natural world have opened the door for him to help save the rivers of his youth, not only for himself, but for all of us.

His book is a roadmap for one of the solutions to the Asian carp invasion. One of the first steps is to drop the preconceived notion that carp is nothing but a “trash fish.” Here are a few of the negative and positive statistics from Classen’s book about the Asian carp:

The aforementioned trendy fish, such as the Chilean Seabass, was once thought of as “trash fish” just like the Asian carp. A successful marketing strategy rebranded the Slimehead, Goosefish and others into a product that now demands a pretty posh penny per pound.

The Asian carp is currently in a similar position, or should we say the “Silverfin.” It is hoped the name change will alter the public’s mind about eating the invasive species and produce a positive outcome for our waterways.

Eradication efforts are not enough to bring down the “Silverfin” numbers, but commercial fishing could help put a dent in the overwhelming population. Supply and demand elements will be essential in successfully allowing any commercial efforts to work.

Classen leaves the reader with a call to action. (Along with many recipes, like Asian Carp Scampi, Asian Carp Jambalaya, Asian Carp in Herb Wine Sauce and Asian Carp Sushi Rolls.)

Everyone can play a role as “Eat the Enemy!” explains. If you want to get outdoors and harvest the carp yourself, Classen gives detailed instruction on how to fish for carp in several different fun and challenging ways. If fishing is not in your bag of outdoor pleasures, no worries, anyone can help by simply asking for Asian carp or “Silverfin” at their local grocer, fish market or restaurants.

To learn more about Joseph Classen, CLICK HERE. Or to purchase a copy of “Eat the Enemy!” – CLICK HERE.