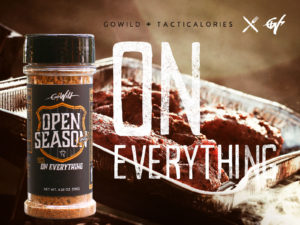 A love for hunting and fishing led to the creation of the social media and activity tracking platform, GoWild. And now, the team that built the platform is following its heart—or really, its gut—to release its first wild game seasoning.

GoWild Cofounder and CEO, Brad Luttrell, is a self-described foodie and wannabe chef. After years of cooking everything from sheepshead fish filet’s to wild sheep, venison to javelina,  you might think he leans on a batch of his own custom blends of seasoning. But in truth, once he found the Tacticalories Seasoning Co., he’s been in love with the pre-blended spices.

“These guys are mad scientists of flavor,” said Luttrell. “I’ve gotten to be friends with Casey, and I approached him a while back to ask if we could work together to make something for wild game that wasn’t just rebranded steak seasoning.”

The Tacticalories Founder, Casey Bard, responded in such a way that would set the course for GoWild’s new seasoning: “Oh, it’s about to be open season on wild game.”

Brad and Casey have crafted something together that combines both fine and course ground spices to consistently provide full flavor and texture, while still using the same proprietary blending techniques that makes Tacticalories the proficient product the brand is known for. Course spices give game meat a perfect texture and bark on the grill, while the finer grinds get deep into the meat for maximum flavor.

Hunters and anglers will find it the perfect go-to for everything from butterflied backstrap steaks to flour-based mix for your fish. While intended for meat, Brad and Casey both note it’s actually really good on hearty vegetables, too.

The seasoning is a small-batch run and numbers are limited. Seasoning can be purchased at GoWild’s website in the “Shop” section.

About GoWild
GoWild is the fastest growing social media and activity tracking platform for outdoors enthusiasts. The community has grown to tens of thousands of users, and developed partnerships with over a dozen brands, including Garmin, National Wild Turkey Federation, and First Lite. The GoWild app is free for Android, iPhone or Garmin. Learn more: timetogowild.com.

POMA is amazing. The responsiveness to member needs is unheralded among professional organizations. POMA listens to our clients’ needs and reacts to them. POMA’s commitment to the industry shows at every conference. Our clients can’t afford to not be at the conference each year.