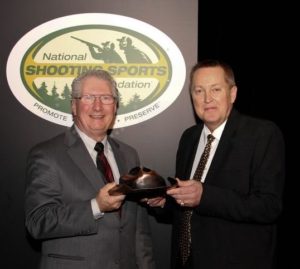 In honor of legendary outdoor communicator Grits Gresham, POMA and the NSSF developed the Grits Gresham Shooting Sports Communicator Award in 2005. It recognizes communicators within the firearms/shooting sports/Second Amendment arena who grasp the ideals, foster the commitment, and display the talent Gresham showed during his storied career.

While working in the Investment Rarities (IRI) Firearms Division during the 1980s, Fjestad became the author and publisher of the Blue Book of Gun Values. With over 1.4 million copies in print, it remains the best-selling gun book worldwide. The Blue Book of Gun Values also has been pictured in Time magazine and listed as a reference source in the Wall Street Journal.

“I’m glad Steve is finally getting recognized for the fine work he has done over many years,” said Tom Gresham, who presented the award to Fjestad. “It takes an incredible amount of work to update gun values each year, and the Blue Book serves as a critical resource to millions of gun owners.”

Fjestad said, “I’m very honored and proud to be this year’s winner of the prestigious Grits Gresham Shooting Sports Communicator Award.  This honor validates the idea of developing and need to maintain the world’s largest firearms’ database.”

Over 30 years, Fjestad also has edited and published over 160 books on a wide variety of subjects, including firearms, airguns, black powder reproductions and replicas, automobiles, guitars, engraving, billiards and pool cues, ammunition, and others. Additionally, Fjestad has written and edited hundreds of articles for various trade publications.

Mark Thomas, NSSF Managing Director, Marketing Communications, said “Grits Gresham was a great friend to NSSF and the industry it represents. We are proud to continue to partner with POMA on this award, which recognizes outstanding professional communicators and commemorates Grits at the same time.”