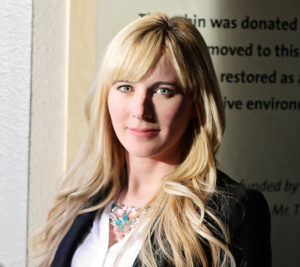 Hlebinsky is the Robert W. Woodruff Cody Firearms Museum curator at the Buffalo Bill Center of the West in Cody, Wyoming.

The prestigious POMA/NSSF Grits Gresham Shooting Sports Communicator Award recognizes extraordinary achievements in communications in the areas of responsible firearms use, the shooting sports, and hunting.

“POMA is excited to honor Ashley for her contribution as a firearms communicator, historian and expert analyst in the media. She will proudly add her own piece of history as the first female to receive this prestigious award,” said Kevin L Orthman, Executive Director of POMA. “The Grits Gresham Shooting Sports Communicator Award is one of the highest awards POMA gives out each year. Ashley is a great example of someone who has spent her career changing the face of firearms in the media and preserving the history and legacies of some of the greatest firearms in the world.”

Hlebinsky is entering her sixth year with the Cody Firearms Museum and assumed the Robert W. Woodruff Curator position in January 2015. To further disseminate firearms history to a broad audience, she is a museum consultant, freelance writer for academic and popular publications, certified firearms instructor, and on-camera historian for networks such as National Geographic, Travel and the Outdoor Channels. For several years, she was a researcher and fellow at the Smithsonian Institution’s National Firearms Collection.

“Ashley personifies today’s generation of young and engaged gun owners. I know that Grits would appreciate her skills at bringing the history and culture of firearms in America to a wide audience.” Tom Gresham of Gun Talk Media.

“Ashley’s contributions to increasing public understanding of firearms and their manufacturing and cultural history through her writing and many media appearances, including in our NSSF video series ‘The Gun Vault,’ is astonishing,” said Steve Sanetti, NSSF President and CEO. “She is most deserving of this award.”

“I am still in shock and humbled to be the recipient of the Grits Gresham Shooting Sports Communicator Award,” said Hlebinsky. “It’s especially gratifying to be recognized with an award that honors the Gresham legacy, as Tom Gresham gave me my first introduction to the media world on both his radio and television show. At the Cody Firearms Museum, we strive to reach our gun enthusiast audience and educate those who are unfamiliar with firearms. I am deeply moved by this award when so many people that I idolize have received it before me, and I only hope that I can live up to their legacy in my advocacy of firearms history to the gun industry, the general public and the academic community.”

In addition to her duties as curator, Hlebinsky is the project director of a full scale renovation of the Cody Firearms Museum, whose collection exceeds 7,000 firearms, many of them rare examples of the gunsmithing craft. She lectures around the country to public audiences, the firearms industry and academic institutions, including the Art Institute of Chicago and the Aspen Institute, addressing the stigmatization of firearms in culture.

About the Grits Gresham Award

POMA and the NSSF developed the Grits Gresham Shooting Sports Communicator Award in 2005, when NSSF honored Grits Gresham with a lifetime achievement award. Gresham was an internationally known sportsman, TV personality, author and host of the long-running The American Sportsman series on ABC television.

The award recognizes communicators within the firearms, shooting sports and Second Amendment arena who grasp the ideals, foster the commitment and display the talent Grits Gresham showed during his storied career.Nominations for the Grits Gresham Shooting Sports Communicator Award come from all corners of the shooting sports industry. Affiliation with a communications or industry organization is not required. Shooting sports industry professionals are encouraged to make nominations through the POMA website: www.professionaloutdoormedia.org.

POMA is the premier communications and industry professional’s organization, and the only media association wholly focused on the traditional outdoor sports of hunting, shooting, fishing and trapping. POMA is also the only media group to support the industry through membership in the most important trade organizations including the NSSF.

The National Shooting Sports Foundation is the trade association for the firearms industry. Its mission is to promote, protect and preserve hunting and the shooting sports. Formed in 1961, NSSF has a membership of more than 12,000 manufacturers, distributors, firearms retailers, shooting ranges, sportsmen’s organizations and publishers. www.nssf.org