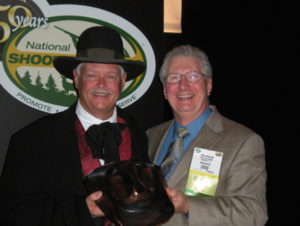 Michael Bane was humbled to the point of speechlessness … impossible … but close.

When informed he’d be honored, Bane’s usual edgy barrage of commentary was stilled, for a few moments.

“I’m honored, almost to the point of speechlessness, which is abnormal for me,” Bane admitted. “Within my field, the field of media, this is the preeminent award. Selection means you have the respect of your peers, and that means so much to me.

“A lot of what I’ve done is take risks, as an early adopter of new media. I’m honored that POMA and NSSF look out there and recognize new media.”

In honor of legendary outdoor communicator Grits Gresham, POMA and the NSSF developed the Grits Gresham Shooting Sports Communicator Award in 2005. It recognizes communicators within the firearms/shooting sports/Second Amendment arena who grasp the ideals, foster the commitment, and display the talent Gresham showed during his storied career.

Bane’s biography reads like an adventure novel. His escapades climbing big mountains, scuba diving flooded cave systems and kayaking spectacular rivers around the world have been chronicled in such magazines as National Geographic Adventure, Men’s Journal, Men’s Fitness and hundreds of others. Additionally, he’s authored 21 books, including Over The Edge: A Regular Guy’s Odyssey In Extreme Sports. 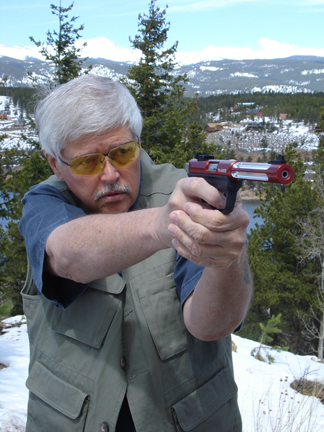 However, it’s Bane’s moniker as a shooter and his multi-media vision and expertise that found him center stage and being honored as the 2011 Grits Gresham Shooting Sports Communicator.

“Michael has been a pioneer in firearms multimedia for years. From magazine articles, books and television shows to podcasts, online videos and a daily blog, he is a leader when covering competition, self-defense with firearms, gun news, and always strongly supporting gun rights,” Tom Gresham said.

“I’m especially happy to have the award go to a media veteran who explores all aspects of responsible gun use. Just as my father (Grits) was a pioneer in bringing the message of shooting and conservation to the public through network television, Michael spreads the word, and introduces new people to our sport, using all forms of new media. Michael promotes the basic message that others would do well to follow – that no matter what kind of gun you are using, shooting is fun!”

“As a television show, website and podcast host, blogger and exceptional writer, Michael embodies the new breed of media professional who is adept at using all the tools at his disposal to reach gun owners, shooters and hunters with news they need to know,” added NSSF President and CEO Steve Sanetti.

“His work with NSSF’s Media Education Seminars program helped journalists from major news organizations better understand firearms and firearm issues and continues to have a positive effect on media stories to this day. Michael joins a prestigious list of communicators who have earned this award, and he is most deserving of it.”

Bane, a five-time Telly Award winner for excellence in cable television programming, is the

I am new to the industry, and I know there is a lot of water left to tread before I find my own sweet little island. However, because of POMA and the commitment and conviction of its founding members, I now have more confidence and better tools than I could have imagined receiving from any other source.... Read More